The Bolt vs. Bolt 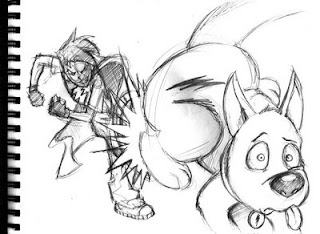 So I came up with The Bolt back in 2001. I entered a contest in Animation Magazine and got myself a little attention which got me an actual 12-month option with a studio. Long story short, I saw the trailer for the monstrosity that is Bolt, by Walt Dsiney pictures and my mouth just dropped. There was nothing I could do. It was a superhero dog. Simultaneously, I spoke to the guys over at Kingdom comics (Disney Comics imprint) about doing a possible The Bolt comic series. They were in the business to explore existing Disney properties in comic form and developing new comic characters to later explore in animation and live action. Anyway, they asked me to change the name of my character cause Disney already had a Bolt. I couldn't do it. So it was a "no way". Well, I still cringe when I see that little mutt. So here is an illustration of what I'd like to do.
Posted by Unknown at 5:32 PM