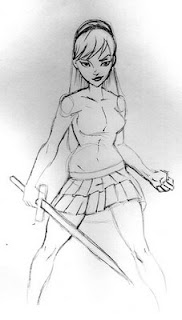 I'm not done with this one at all. I thought I'd share what I had and finish it later to share again. This is a character I created years ago. Without sharing too much, she is a god, and the daughter of a very well known Greek god. I named her after a Smashing Pumpkins song called "Porcelina of the Vast Oceans". The story is that her father began noticing changes in himself. His powers were fading. In short, he was losing his godhood and becoming more a man. He decided that in order for something of himself to survive, he would create a child. Porcelina was born as the last remnants of a fading god. Where her father kept to himself and his domain, Porcelina wants to know what the world has to offer. I'll finish this up some more.
Posted by Unknown at 5:10 PM