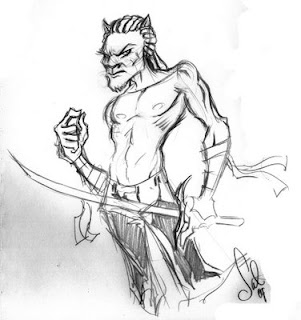 I created this guy yeeeeears ago. He's part of a story I created called "The 2nd Kingdom". It's about a lot of things that are deeply important to me. As a matter of fact I decided today ti was time to start finishing the story. I've been writing it for more than 8 years and I think the pressure of it (and it being good) has kept me from finishing it. It means that much to me. Anyway, this guy is part of a Lion culture in the story. I know he looks really pissed, but he's not that kind of guy. This character was a reason for me to do a Spider-man story without drawing in Spidey. He's all about the jokes, even at inopportune moments, he just can't help it. He's quick with the mouth as with the moves.

Most people think he's a goof off even though he has an impressive fighting style. He's often asked, "What do you care about, Noel?" And he answers, "I care about....uhh...a lot of things."

He and a previous character I sketched here, Katherine Whitehorse, are part of a surrogate family. You see, Noel was banished with nowhere to go or to fight for. And then he met King Arthur...