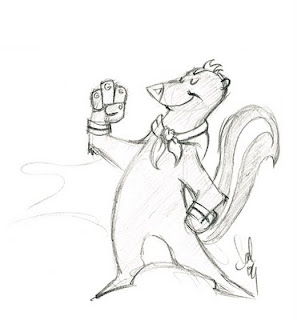 Yesterday I had the chance to draw with a fellow artist. His name is David and he's about 8 years old. What makes him a unique artist is that he's austistic. This guy is fascinated by cartoon characters; his favorite being Spongebob. We spent a lot of the afternoon drawing on anything we could find and eventually he ran out of ideas, so he asked me "What should I draw next?". Well, seeing as I've been on a character design kick as of late I told him to draw a superhero skunk. Puzzled, he took pencil to paper and started going for it. What he drew was actually pretty funny and I wish I had it to share, but someone picked it up with some paper plates and dirty napkins and dropped it in the trash, but I got a good look at it before that and what you see here is my version of David's character. He or she has no name, but maybe I can think one up. It's a good feeling when you can pass something on to a child, especially one as special as David.