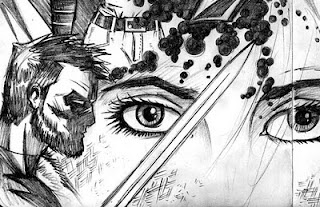 If you read the previous post, I alluded to a famous grandfather of Artie's and like I mentioned before, the story I wrote involved the true story behind the myths and legends of the world. This man here is King Arthur, Artie's Grandfather displaced by a few centuries. In my story he didn't exactly die as the legend told, no, he went somewhere else. Where that place is I'll keep to myself for now. Arthur stripped himself of the title of King, as a bears bad memories for him. But people look unto him as a King still and that is where the title of the story comes from. The woman whose eyes you see here belong to the woman who gave Arthur the most famous sword anyone's ever heard of...Excalibur. Even after her initial meeting with the King, she still closely follows the man she entrusted with one of the world's most precious gifts. Her reasons aren't revealed right away, but most things aren't. That's it for right now, I'll continue the rest of this week!

Sounds really cool. Maybe you should make it into a comic book.