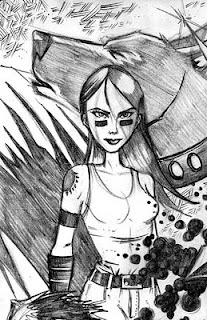 I've drawn Kat many times when this blog was still under the LeadRocket name. Actually here's an old post of Kat from back in Feb 2009.

Kat was a troubled person who wanted nothing more than to have a normal life and with one hard decision she erased all possibility of that ever happening. But there is a redeeming quality to the life she now leads under the care of Arthur and Merlin, a new purpose. That's something she never had. She had to die to find it. Weird, huh? The other guy featured here is Artie's partner and best friend, Tornado, the Great Dane. His role is probably the most important when it comes to Artie. He's the one that's been there since his brother died mysteriously a year ago and has been the keeper of Artie's secrets since. He's the guardian of something so special that even he can't really understand it, but he knows that the boy is special and he's right beside him when he finds out just why he's so special.

Tomorrow you get to see the entire image. :)