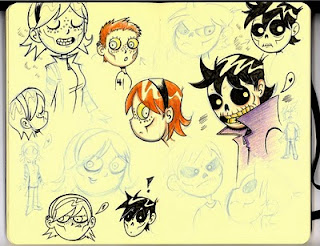 I've had these characters in my head for about a year now. Actually, their names gave birth to the idea of them. It's kind of weird. I don't want to reveal their names just yet, because I'm afraid someone might steal it. I know it's a little late to be getting paranoid, but I really think it's a clever one.

I'm not a big fan of zombie movies. Most are boring and been-there-done-that, so when I run into a really good one, I have to tell people. Well, I decided to create zombie characters, but I wanted to do something different. Well, what if I could make a love story out of zombies? Here's what I came up with.

One day, like in most zombie movies, something went wrong and it led to an outbreak that infected the American population. Most of the country is running rampant with these brain eating freaks. But what if in the middle of all the mayhem, true love was found? Enter these two infected freaks who serendipitously found one another during an ambush on some survivors who were trying to escape from Los Angeles and into Nevada with hopes of rescue and shelter. At first glimpse of one another they managed to snap out of their frenzy and it was love at first sight. Where they never found true love as live human beings -- they have found it as the undead.

These are just prelims. I'll continue reworking these two until they feel right -- just like I did with Sushi and Gazpacho. I hope you enjoy the sketch. Comment!

I can see which ones you're leaning towards. Are they the ones with the arrows pointing to them?

Aww i love these cute zombies.

i hope some of your stuff becomes a actual cartoon on tv!! i'd tottally watch it :D

OOH, I LOVE your sketches!! I smell tattoo all over them! Do you do custom sketches for people!?

Hey Tricia! That was fast. Yes, I indeed do commissions. I'm actually working on a Hellboy design for my buddy. Let me know if you have any ideas.

Great thought your information is too much informative. Your design is very nice. We are also providing online designing services. You can see our portfolio and get more creative ideas. You have to do work as this pattern its very simple and easy. We provide logo design services in dubai UAE. We here in this market since many years ago. We provide affordable price to logo designer and development services in Dubai UAE. You can give me order and take in time. You can also create custom logo design and you have in mind any idea then tell me our support team.

With customers basing their buying decisions on who is ranked at the top of page, choosing the right seo company in dubai to get you there is very important.

Hi, I am also a web developer via Webnado Undead Development is a zombie existence game with an inspired building scheme for the HTC Vive. This demo shows off the preliminary level where you can forage for loot, break apart gear, board up your home, and defend beside the undead.

This is especially nice one and gives in-depth information . Video animators Service Company