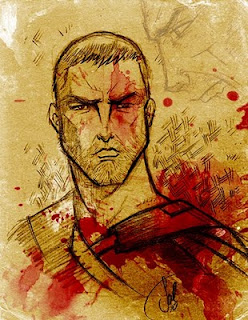 I've been watching Spartacus (a Starz original series) on netflix -- about to finish the season finale actually, and it's been really awesome. The first 3 episodes were hard to get through, but after that the treachery, lies and ultra violence got me hooked. It's not even about the gladiator battles, it"s all the deceit compounded upon lies and lies that you really want to see unravel.

If you haven't seen it, it takes place during the glory days of the Roman Empire. A Thracian warrior is betrayed by the Romans, separated from his wife and sold into slavery. He comes to the house of Batiatus where he becomes a gladiator in training and renamed Spartacus. All he wants to do is escape and get back to his wife, but obviously that can't be, and that's where the fun begins. At first I thought of it as a 300 rip off, but it quickly becomes its own story. I really recommend it. I hope you enjoy today's post -- quite different from Lucy loves Argyle, huh? :)

Dude that's awesome. I love that show but I hear it may not come back.

This is awesome, I noticed it just as you sent the im. Very cool...

I think the show is sorta kinda based on a real person, just like 300 was based on a comic book that was sorta kinda based on an actual Spartan battle. I haven't seen it but once it's at blockbuster I'll pick it up! If you like Spartacus you might also like "I Claudius" and "Rome" two TV series that are available to rent. Like your drawing by the way.

Mate you are a talented and gifted artist, and you have chosen a great show. I have been lucky enough to see the first session of this show and it might be the best thing on TV right now.
Keep up the great work.
Cheers,
http://shanegenziuk.wordpress.com

@Shane G - Thank you, sir. I caught the last 6 episodes on netflix right before they took them down. So I was pretty happy I was able to catch the first season. I, like you, want to see what happens next, cause that finale just made me want to get up fight against something...anything. :)

Thanks for dropping by!