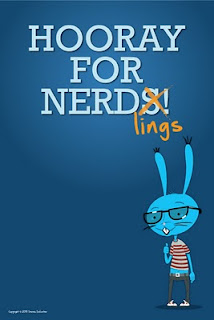 It's great to be back and blogging. I recently wrapped up a few big projects, but I've been doing a lot of sketching and working on some ideas that could be really fun.

One of these fun things harkens back to a sketch I did last year in April... the Nerdlings. The idea came to me when I thought about how being a nerd is actually cool these days. The San Diego Comic Con, for example, has become one of the biggest events of the year. Each year you'll notice a large crowd of people who are not your typical geeky types, in attendance. That leads me to believe that the world is beginning to accept their inner geek. Geeky stuff is now mainstream, and worth billions of dollars (Disney bought Marvel, didn't they?), and people like Steve Jobs and Mark Zuckerberg are heroes to this generation of teenagers. You don't have to hide your comics from your girlfriend anymore and you can wear that Star Trek t-shirt outside! Heck, I even designed a shirt celebrating the fact.

The Nerdlings will be a nod to today's love affair with nerds. It took awhile, but it's finally cool to be smart, quote Star Wars, read comics and play Dungeons and Dragons. Well... maybe not the last one. ;)

P.S. Here's a quick video that will illustrate the matter. Lewis Skolnick and Gilbert Lowell would be proud of how things have progressed. (Watch at 1:30)

P.S. Would you like to see this Nerdling as a limited edition print or a t-shirt? I would love to hear your thoughts.
Posted by Unknown at 7:48 PM

For sure the print. I missed your straight fun posts!

Imagine if the "geek/nerd", Let's call 'em "nerks" or "gerds" shall we?( Hell, only a geek/nerd would even come up w/ that idea. ) were to rebel against conventional or the "more able bodied" society. What havoc might they wreak? Oh the power w/in those puny fists (that have never punched anything save the clown), that when unclenched could unleash a whirlwind of whup-ass upon an unsuspecting earth.

Well, we all get just a taste ever so often when a new crippling virus/worm is entered in to the global communication dynamic (I hate information super highway). "ILUVU" or "here you have" are just to name a few. How ironic that they would embed a virus in the midst of an innocent search for free pornography. So, not only the depraved, but the cheap & depraved get a little "eff-u" sent back their way. Rather symbolic I'd say of when a spouse strays from fidelity in secret only to bring home the very "fleas" of the "dog" with which they had previously lain.

It's been revealed however that, that's the government's new way of "shopping for new talent" in that department. A natural habitat sort of thing I'd surmise.

Now, on a different note we do know, especially recently, how this has been abused and used to hurt others, and the repercussions of such acts, so a level of moral/social responsibility is called for in this regard.

We can easily appreciate how geekdom or nerddom has infiltrated our everyday lifestyle, even speech. We "google" mostly when we research something, do we not? (sorry bing, you're just not "there" yet) and don't get me started on social media network sites, or the "NEW -(insert place name here)". We are we reading all this right now again?

I jokingly harassed our illustrious blog-host (nerd term) and here's the Reader's Digest version of our chat.

Me: so you're changing our image? making us more "palatable" to those who "more easily laid during high school/college years"? to those who would have seen to it that we never had lunch money ever? to those who never had to excavate their unmentionables out of their derrière w/out being overweight? Oh well, their money spends too, right?
hmmnnn... don't social media netywork sites & and the enormous amount of superhero/vampire cross-cultural entertainment already show that? if only we could have a first-release piece of software (1.0) that performed bug-free. then again where's the profit in that?

Me: oh, ..well, ..ok. even the socially awkward deserve a little exploitation.

Me: Feel just like a Kardashian or is that Cardassian?

Him: thats cause theyre not geeks. theyre norms

Me: that's normal? give me a closest "Team Piccard" fan anyday

Me: Can't wait til I forget my underwear in public one day and get to claim "normalcy".
I know I switched celebs whilst bashing there, but I was caught up in my own hate.
See how evil hate is? Not a family value.

Him: not at all


Ok, well, I've dominated this enough for one day. Keep on rockin' Dr. D! Maybe we will eventually sift all of the sand out of the sensitive nether regions of the collective "normal" 'straight" "conservative" society. Can I get a witness?

Geeks have inherited the earth. No doubt and I would definitely pick up a print of the nerdling.

You're right and a print would do just nicely.

Funny... A friend of mine confesses he was a geek in high school. He just went back to a reunion and said (in the current economy) that it was "revenge of the geeks".

I proudly announce that I'm a Geek on my blog and all my social networking sites. I think it helps to build my credibility. LOL

It does seem that being a nerd is very much acceptable these days. I think it's a good thing. And I think your illustration would be perfect for the cover of a children's book. Have you ever thought of writing books or collaborating with a children's book writer?

My business partner called me a geek when we deveoped software as I led the project and even understood some of what the devlopers were saying.

The Nerdlings are a great idea and can see many possibities from print to video etc.

@Keyuri This reminds me of the wedding I went to this past weekend. It was a mini high school reunion and one of the guys I saw there was a cool jock back in those days. He kept complaining how his current life is dull and boring. It made me realize he piqued in High School.

@Sherryl That has been in the back of my head for awhile now. I'm still working it out, but I like that were on the same page. That's nerd power.

@Heather I have thought about and have pursued it, but I run into too many sayers and no doers.

@Susan Yes, that it pretty geeky, but such an asset as well. I'll have to further develop the nerdlings. Maybe I'll name one Susan and she'll be from Australia. ;)

I'm not a geek or a nerd. Should I feel left out?

You are absolutely correct (and a graphic genius ) it is becoming more acceptable to promote your inner nerd. Or maybe it's just that now more than ever people realize their future paycheck depends on 'the folks at that table'.

I'm not sure I understand the difference between nerd and geek but my youngest daughter is managing to be one of the popular kids and treasurer of the national junior honor society. *Although I retain pics of her with her uniform shorts pulled up toward her armpits (in classic Urkell fashion) just in case she gets above herself - or I need help in my retirement.

Those 'folks at that table' are definitely an important bunch. And thank you for the kind words. As for the difference between geeks and nerds... Usually geeks can be anyone that has an obsession with any kind of pop culture pillar. This could be comics, Star Wars or your most recent examples are your Twilight fans and Harry Potter maniacs. These are people who can still get a date if they want to. Nerds on the other hand are those that spend a lot of time being fans of the above mentioned items, but they spend too much time with it and become socially awkward. They can't get a date to save their lives, but they become savvy in technology and excel. Like your Steve Jobs and Bill Gates. When the cool kids reach their peak in High school, the nerds lay the groundwork for the future so the cool kid's kids can benefit from their endeavors. That's how I see it in a nut shell. :)

If that's the case I mispoke.. my daughter is the Math, Science and English genius passing 12th grade work in 8th grade... I'm the history, warfare, Latin and classical studies, (with a side of middle English) scholar. (In the UK - girls with that education used to be called a blue stocking) So what label would that be

Since she's 5ft7in at 13, a IInd degree blackbelt in Taekwondo, who looks like a Brazilian supermodel & I'm an ex military officer/fencing champ and armed to the teeth, you can give us any label you like ;D

As for the pics .. lets just call them 'insurance' :D

I would be honoured Dennis!!

Hope to God the nerds don't take over the world. What a bore...we would all just sit by the computer. No fun, no excitiment, nothing......

You are too funny! Have you noticed that the geeks/nerds from high school are the one who have really made it? The "cool" kids? They are home sucking their thumbs LOL I have heard it suggested that girls can date the "cool" kids in school but they should marry the "nerds"!

BTW - I am going to ask Mark Zuckerberg to marry me or maybe I can adopt him :)

@Julie I think I'm going to beat you to it!

Graceful written content on this blog is really useful for everyone same as I got to know. Difficult to locate relevant and useful informative blog as I found this one to get more knowledge but this is really a nice one.persoonlijke ontwikkeling nederland