You Can Find Friends In Your Comments Section: An Interview With Vanessa Brantley Newton 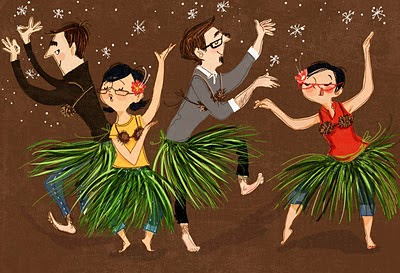 A few weeks ago I received a comment from Vanessa Brantley Newton, a very accomplished, New Jersey based illustrator. I didn't know who she was when I first glanced at my comments section, so you can imagine how pleasantly surprised I was when I saw this... 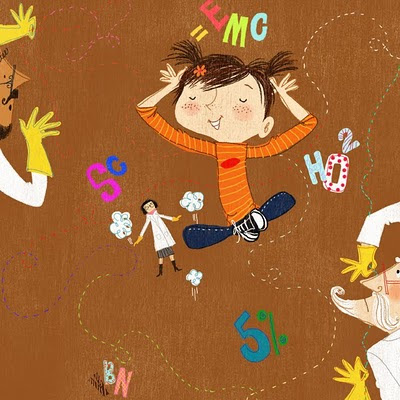 I immediately fell in love with her colorful and whimsical style. As you know, I love illustration. I do it for a living, so to have someone like Vanessa enjoy my work meant a lot. So I reached out to her and she couldn't have been more kind. You know that feeling you get when you reach out to people through an email and it feels like they're in the room with you? That's the same feeling I get from Vanessa. So I decided to ask her for an interview and she agreed. She really has an amazing story so please read on and enjoy. You might learn something. ;)
So tell me Vanessa, when did you know you wanted to be an illustrator?
Very, very early on. I knew when I was a kid that I wanted to be an illustrator. It was effortless for me. I'm dyslectic and during the time I was in school they had no programs or ways to tell if a child had a learning difficulty. I would draw all the time and it became the way that I expressed myself and still express myself.
That must have been difficult. Do you remember what things inspired you as a child, and what inspires you today as an adult?
All things whimsical and childlike. Color and noise. The hilarious and silly, were the things that inspired me as a child. I adored Bugs Bunny, Rocky and Bullwinkle, Courageous Cat, Minute Mouse, Pink Panther and Felix the Cat cartoons. I loved the illustrations, color, background, humour and all of it. As an adult these are still some of the things that inspire me. I love mid-century illustrations, books and games from my childhood. All things retro speak to me. From the shapes of appliances and their awesome colors to the fashion that were worn. I am a child of the 60's and so it shows up in my artwork. I can't help it! :D 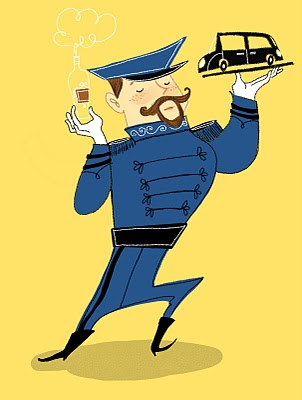 When did you get your big break? And did you work any odd jobs before you became a professional illustrator?
Before I became a full time illustrator I worked as phlebotomist for over 25 years. In other words I was a vampire. I loved working with people and helping them. I was very good at what I did drawing blood. I worked with Aids and cancer patients of all ages. Mostly children often with terminal illnesses. I also worked with newborns and premature babies. I got my big break in illustration when my husband, homeboy, and babydaddy, was laid off from his job as an Aerospace Engineer. I was content to be a stay at home mom, but when he lost his job things really began to fall apart and quick. I had been doing some work on the side with illustration, but not enough to support my family. A greeting card here or there and an illustration for a family friend or something. The lack of money really became a big, big problem.
I started drawing again and working on creating some pieces that I could show to get some work. I picked up some books on children's book illustrations and I tore into each one as if my very life depended on it. I even took some classes and didn't really have the money for them, but found it some how. A friend came over to visit me one day and saw all my new illustrations on my dinning room table and asked who did the work? I told her that I was working on putting a portfolio together to show. She then told me that she worked at Scholastic as an editor and wanted me to submit my work for Scholastic's Read and Rise Magazine. It was my first real job as an illustrator which opened the door for me to do a wonderful series called, "Ruby and the Bookers Boys", written by Derrick Barnes. It's still selling today. I have been blessed to be working ever since. 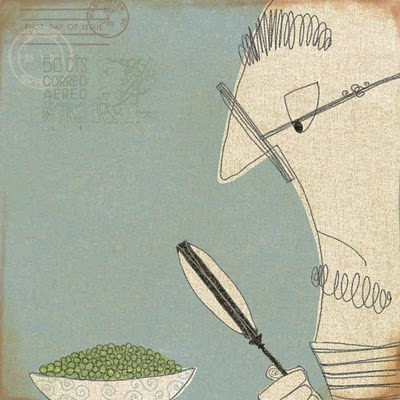 What has been your favorite and most fulfilling project you ever worked on and why?
"Let Freedom Sing" by far is the most fufilling project I have ever worked on because I wrote and illustrated the book. It would be my very first solo project. "Let Freedom Sing" was the hardest work I ever loved. I still look at it with awe and wonderment! It talks about important moments during the Civil Rights movement without making oth
ers feel bad, but makes us all take a look at ourselves encourages us to let our light shine in everything that we do. My favorite Project, I would have to say, was a book called "Drum City" by Thea Guidone. I love this BOOK!! They gave me all the freedom that I needed and wanted to create illustrations that I ADORE!!! It came out in June 2010. 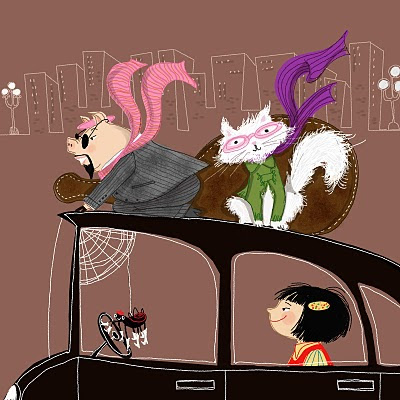 What advice would you give young designers and illustrators who are looking to make this a career path?
Be prepared to do the hard work. It will only benefit you if you do. Know what it is that you want and go for it. Be focus and remain true to yourself and your vision. Hone your talents and skills to make them stand out and better then the next guy. It will be thing that makes your work stand out in a crowd. Find your voice of expression and style. Don't be afraid to try new things and work in different media. Always be open to learn from others. You stop learning, you stop growing. See yourself where you want to be and be your own cheerleader!!! Stay around people who are postive and believe in you. Go for it!!!
A big thanks to Vanessa Brantley Newton for doing the first Tanoshiboy Chronicles interview.
Posted by Unknown at 7:36 PM

This is a wonderful story of someone with the talent persevering and succeeding, against difficult odds, in a very competitive industry. I also love her illustrations. An all-around heart-warming tale.

This is awesome. First of all your connecting with a reader of your blog who is also an illustrator. Second your decision to interview her for your blog. Very clever and a great example of really connecting to your readers. Vanessa's story is truly inspiring and how kind of her to share it with your readers.

Great interview Dennis and like Jeannette I love vanessa's illustrations.

It also shows never give up when you know you have the talent.

Ladies, thank you for your comments. I never expected such a rich story so it was a pleasure to share it with you.

Really good interview man. I think it goes to show that it takes a certain kind of person to be what they want to be.

your blog just keeps getting better. She has a really cool retro feel to her stuff. You guys should work on something together.

Dennis, Thanks so much for sharing my story with your blogger friends. I am so very humbled again by your desire to even interview. Hope that it does what it was meant to do. Encourage other creative people. Keep doing your thing man. It's beautiful! Happy Thanksgiving to you.
VBN

What a fabulous interview with a dynamic illustrator and individual! Thanks for sharing her with us in such a clear, easy to read way.

I just had my two year blog anniversary, and I am amazed at the community of artists who make themselves so available with friendship, enthusiasm, advice and support.

When I started blogging, I thought it was because I enjoyed writing. That's still true, of course, but I LOVE the interactivity of blogging and the people I talk to from all over the world!

vanessa is the real deal, she is talented beyond belief and is full of kindness and support. she has certainly been a huge influence on me and a good friend. the illustration world is very lucky to have her!

thanks for this great interview!

Thanks, Dennis & Vanessa, for sharing. I too love and admire Vanessa's work, but more than that, her encouragement of others. How inspiring! And Dennis, thanks to Vanessa I look forward to learning from and following you as well.

Charming illustrations and inspiring interview. And I can really use the inspire and the charm right now. Great post.

Thanks for such an awesome story! Really inspiring! I am also so happy to read that you connected through blog comments. That is really fantastic!

Thank you for the lovely interview. Vanessa is my very favorite illustrator. She inspires me everyday!

Vanessa is a huge inspiration of mine. Not only is she amazingly talented and inspiring, but she has a giving nature to match it.
Love her! Thanks for sharing the interview. :)

Vanessa is just awesome. Not only is she an amazing illustrator, but you can just feel that energy coming from her words, and her drawings. She is electric! Thank you for sharing this with us.

What a great interview. Vanessa is one of my favorite people. She's a wonderful person and a wonderful artist.

I really love the illustrations! Great interview Dennis. I like hearing about people's "tipping points" leading them to fulfill their dreams!

This is the perfect way to end my day...in the company of artists.

Vanessa, Love the whimsy. Very well done for being an illustrator for a living.

Wow! I'm glad you took the time to tell Vanessa Newton's story as well as share some of her illustrations. I enjoyed the entire post. Well done Dennis.

Good story on how if we persevere we succee!

Beautifully done interview. Although I write rather than illustrate, knowing Vanessa found success by being exactly who she was inspires. Loved the illustrations, they added even more interest to a fascinating piece.

Vanessa was one of my first contacts in the blogging life. I´m agree with you: when I e-mailed her, the feeling is nearless. She is fantastic.

Vanessa was one of my first contacts in the blogging life. I´m agree with you: when I e-mailed her, the feeling is nearless. She is fantastic.

Uplifting interview Dennis. Thanks for introducing us to Vanessa.

She has a very fun illustrative style very talented. And yes you can meet friends through comment and twitter : ) Hint* lol

What an incredible talent you have Vanessa! I, too, am a Jersey girl and love to see a local girl make good!

I looove Vanessa's work! She is such a talented and sweet lady! Her comments on my blog always make me smile :D. Thanks for sharing this, really inspiring!