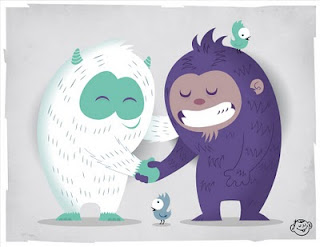 As the year comes to a close I've reflected on what made this crazy year so special. Let's face it, things all over the world are pretty bad, and whether you're a designer, illustrator, marketing specialist or car salesman, you felt the pinch again this year.

But even with all the setbacks and economic down turn, there are many things that made a difference this year. I came up with my top 3, (although I had many more) and I'll rely on you to add to the list.

3. LinkedIn - I had my account open for almost a year before I really started using it at the beginning of this year. Joining blogger, networking and creative groups has been a huge plus, not just because I've had the pleasure of meeting some great people, but also because I've learned so much from just participating in conversations. A hearty thank you goes out to Susan Oakes, Rob Berman, Julie Weishaar and everyone else for their support of this blog and for the retweets along the way.

2. Twitter - Back in 2009 I thought it was the stupidest thing ever created. Just another outlet for mindless reminders of what someone ate for breakfast and what was in store for the weekend. But it's much more than that and the sheer connections and relationships that I've begun because of twitter has been mind-blowing. People like Sarah Wu and Kristy Elena started off as tweeps but feel more like pals now. There's so many to list, but I'm trying to keep this short. You know who you are.

1. People - No matter how I met them this year, I have felt an overwhelming wave of support from people, and that's why I end with this. You can swear by social media, SEO and all the gadgets you can buy, but in the end people make the biggest difference and what I took the most from this year is that if you build relationships in life, in business, you will be successful. A special thanks goes to Dayne Henry Jr, Heather Fonseca, Sheila Atwood, TJ Lubrano, Tricia Lornston, Vanessa Brantley-Newton, Michalea Razi and everyone who supported me and this blog.

So as you prepare for 2011, keep sight of what's important and do like the little monsters above are doing and create partnerships and friendships. Give, give, give and it will be returned. Happy New Year from tanoshiboy and Salvatier Studios!

Hope to be working together soon!

Please add to the list and tell us what you experienced as a major difference this year. Who knows, it may help someone.
Posted by Unknown at 2:59 PM

You've come a long way from when this blog was merely a sketch blog. Your reinvention has been refreshing as most artists just like to post there work and never offer anything else. I'll see you in 2011.

I love the monsters. so friggin cute. You have a great blog!!! <3

Ooooh look mr. Brad said what I said haha! Awesome and glad that I'm not the only one!

Thanks so much for the mention! I'm honored to be included amongst those awesome people! Okay let me think, you mentioned Twitter & People, these two made a huge difference for me as well in 2010.

I would say, that believing in myself and stick to it, made a huge
difference this year too. It's a bit more personal than what you've listed, but this is the base to most things you want to do in life (And this goes hand in hand with people, because the downside is that one can easily get knocked down or confused by others. We just stick to the positive side ^_^)

@Brad Thanks for sticking around, Brad. HNY!

@Sheila Good to see you again. And thanks!

@TJ You're a doll. I agree that in anything you do you have to be your own inspiration. I wrote a post about that very subject a few weeks ago. Feel free to read it. And friendship never hurts. :)

You set an incredible example of being positive and generous and TALENTED, Dennis. I know I speak for many people when I say, thank you for such wonderful, encouraging words. And thank you for the shout-out too! Can't wait to see what awesome opportunities come down the shoot for you in the New Year! I know you will seize them fearlessly!

Agree with you about social media. You do meet quite a few interesting people online. Lots of people you have never heard of before that take an interest in what you are doing. Even praise what you are doing and recommend you on Linkedin without you asking. Amazing, isn't it.

Dennis, As one of your fellow members in the LinkedIn blogger group, I endorse your comments here. I'm glad to hear the group has helped you. I feel very grateful for the support I've received there.

this pretty much sums it up for me too :) except that I don't use twitter... maybe I should!

Oh and festivals are a good way to meet people and contacts for cool projects too!

Dennis -- thank you for your support and the thoughtful comments you've left on my blog -- you're a good artist too! Very generous offer of your services. Happy New Year! And may it be a prosperous one for you.

@Michaele Thank you so much. That's the plan. :)

@Catarina Absolutely. It's a great community.

@Sjan I'd love to hear more about the festivals you attend.

First up thank you for the mention and thanks must go back to you for support and I have thoroughly enjoyed reading your posts and of course admiring your illustrations.

I must say the LinkedIn blogger group we belong to is one of the most supportive and one I enjoy being part of.

Hi Dennis. Thanks so much for the mention on your blog :) Like Sherryl says, I agree 100% with and endorse your comments. I too have been very fortunate to meet people like you and the others and look forward to continuing our mutually beneficial relationships in 2011.

I would definately agree on what you have listed as what has made a difference this year (well - last year now!).

Starting to blog in September really made a difference for me, and then finally getting on the twitter band wagon and realising it's actually really useful. LinkedIn has had an amazing impact on me, from job offers, to reconnecting or connecting with people. The main thing though has been completing a 6 month Young Women's Leadership program which actually 'awakened' me and led me into all of these things. It has been truly inspiring and life-changing to me.

Dennis, How kind of you to share reflections and recognize many who enhanced your journey. Without your own open mind,and willingness to expand your endeavors, you wouldn't have left this post. So kudos to you and the example you set. Here's to a fantastic 2011.

Great characters! Wishing you a wonderful 2011!

Thanks for the shout out. I do love your take on things. Our LinkedIn group has really been the highlight of the year.

Thanks for the mention Dennis. I think 2011 is going to be fabulous. I'm going into it with a whole bunch of new friends!
Love,
Heather
http://heathersdesignblog.com/