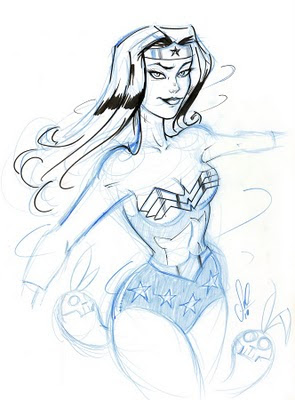 I almost didn't make it today. But I took everyone's advice and decided to do a pin-up. It's not the traditional pin-up you guys were thinking about but I couldn't help myself. I was watching the documentary Secret Origins: The Story of DC Comics and when it came to the portion in the film where they talked about the influence that Wonder Woman had on pop culture, I couldn't help but sketch her. Especially after seeing Lynda Carter twirling around to change into Wonder Woman.

I remember having the biggest crush on her when I was a kid. I think we all did in some way. One thing I wanted to do with my WW, was to give her more of a mischevious expression as opposed to the heroic. We've all seen that. I wanted to see a more human approach. So I hope you like it. I almost inked the whole thing, but I saw the time and wrapped it up. It's a sketch after all. I might just give this one away too.

Again, go see Dayne's sketch which I think you'll like as well.

P.S. One more day left. Any suggestions?
Posted by Unknown at 11:21 PM

I wish you would have inked it. It looks great already. And she looks naughty and that's cool. I saw that same doc and I really liked it. As a long time comics fan it really is amazing that comics are still around. Modern media owes a lot to what these men started back in the 30s. Lots of movies and shows would have never existed without the groundwork of these artists and writers. I wish you'd draw more women. That's my suggestion. Oh and I want this sketch!

Dope sketch. Found you on tumblr. Sweet shit man. And I want this sketch. How bout some batman.

Really cool. I like how you switch it up.

Awesome look and vibe! I love the mischevious expression. Truly befitting of a strong woman. Always love seeing your work.

Good call on the perfect pinup girl - I ADORED Wonder Woman when I was a kid. My mom had to peel my WW underoos off me at night to wash them because I never wanted to take em off! ;)

Woohoo! Who doesn't love WW?! She looks amazing and I love the mischievous expression too. Will you finish the ink? Would be awesome to have this as sketch ^_^.

Very nice Dennis!
Can I just ask - what are the little bunnies doing?

What you have done with her eyes has added a dimension to make her more interesting. All your sketches have been great to look at.

Thanks again for the comments everybody. It's been fun. I'm still thinking about what to do for today's post so stay tuned. to answer Heather, the koneglioz and the cyclopees are spectators. If you see them in any of my stuff, they're there as witnesses.