Inspiration Comes in the Middle of the Night 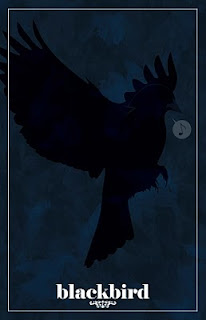 I was in a meeting that turned into a Beatles discussion. We all picked our favorite songs, but one questions was "which one means the most to you?". I picked Golden Slumbers (or the medley, as it's also known) because it has a great message at the very end. "The love you take is equal to the love you make..."
A great message, in my opinion. As I was getting in my truck to go home, a Beatles song is on the radio. To my surprise it was "Blackbird". If you've never heard it or it's been awhile, watch the video below.
It's a short and sweet song, not to be denied. So when I
got home I felt inspired and created an image representing the song. Why do these things come to me so late at night when I should be sleeping? I don't know, but I love it and can't deny it when it comes.
TB
Have you ever been inspired late at night when the house is quite and everyone is asleep? Were any good ideas born on those nights that led to some gre
at ventures?

01.15.2010 I've never done this before, but I went back to the drawing board, so to speak, and did an alternate version of Blackbird. I actually like this one better, because it's really what I was feeling when I first designed it in the first place. I suppose I didn't execute as I originally wanted to. I guess that's why pencils have erasers. Would like to get some votes on which you like best. Hey man I lovebthe beatles and I've been waiting for more art posts. I like the informative stuff but this is what really excites me. Keep it coming. You making this a poster?

I agree with Brad, I really prefer the art posts although you can combine new illos with some of your info posts so I have to check those out too. I love blackbird. Along with Let it be, it's my favorite song.

Same here! I'm an night cat (yes a cat & not an owl hehe). My inspiration for either illustrations or stories come to mind when the world is asleep. I love to surround myself with paper, pencils, paint, music and just draw (or write, but drawing is what I the most lately).

Sometimes I do have this internal battle, because I should be sleeping. But I can't ignore it!

Hi Dennis,
Wonderful you're inspired at night. I never know when my muse will sing, but whenever she does I stop what I'm doing and try to harmonize. :)

@Brad I hear you. It's been awhile and I'll try to keep it consistent. Thanks!

@Brad Thanks for keeping an open mind.

I always keep paper and pen by the bed to capture those ideas that come late in the night. I also write when the muse strikes. A good example is my post about Starbucks logo that I cited you in the text.

Can't say I've ever been in a meeting that turned into a Beatles discussion. Nice to hear that you draw inspiration from music Dennis. I draw my inspiration from people venting about problems they need to solve. :) I loved hearing Blackbird again.

Blackbird is on of my favourites. I get ideas from a numer of places and ways and one is the simple act of observing especially the way people express themselves.

I love the Beatles too :) MOST of my ideas come to me in the middle of the night which is why I don't bother going to sleep until really late (actually really "early" the next day). When I do and my mind is not ready to sleep, I just have to get up and go back to the computer anyway!

great work Dennis. I really like your work and must say i am gonna be an avid reader of ur blog. Thanks for commenting on my blog techalysis.com

Thank you, Adi. I enjoyed your post on the iPhone for verizon. Well done.

Wow! As usual, your work rocks! This is what I would call a "framer". And I love hearing your thought process about it! Nice work, Dennis!!!

Nice work , Anyways yea I think it's usually late at night when I can work or get my idea coming. Is this a designer thing? My fiance never understand me. My Ad told em the same thing too that he works late at night at home thats when the concept are coming in haha..

Many times I get ideas when I'm falling asleep or waking up which is because you are in touch with your subconsious.

Interesting that you didn't mentioned the most known Beatles songs. Makes me wonder how the perception of the Beatles have changed? What's their brand like in the eyes of children today? Probably very different to how their brand was perceived say, 30 years ago.

I think they are regarded as musical gods today. I've been a fan since I was a child. So I've connected with all of the music and not just the popular work. But it's what I do most times anyway.