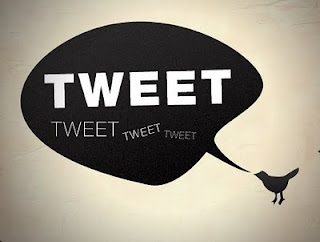 Today's post is by my first guest blogger of 2011, Amara Poolswasdi (@amaravp), a fellow designer who specializes in visual design, and business development, and someone I met through twitter just two days ago. Enjoy.

If you’ve ever felt alone and isolated at work, you’re in luck. There is a pretty large and tight-knit community already buzzing away on Twitter. Because we pretty much sit at our desks all day, it only made sense that a real-time community would be built around social media. We are, after all, wired to the computer 24-7!

Twitter can be pretty overwhelming sometimes, even for the veteran user. With thoughts, emotions, and news flying at the speed of tweet, it can be difficult to keep up or even make a dent in the overall Twittersphere.

And, for the love of Goethe, don’t tweet in text-speak. It’s terribly annoying and turns off the entire community. If you want to be taken seriously, learn to say it in grammatically-correct English in under 140 characters. There’s nothing worse on Twitter than having great content and a great message but terrible execution.

How do you try to cut through the clutter?

Thanks for these suggestions. Useful and simple to follow. Right up my alley!!

I have read a lot of blog posts about Twitter today. Must be what happens when you are trapped by two feet of snow. This post is so simple but powerful. Best one of the day.

@Rob I'm glad you think so. Amara has a way of writing the way she speaks. Very conversational.

Ha! I just tweeted the article. Really well done! I almost never just tweet. Usually I retweet or post articles. I guess I'm going to have to learn to write witty things in less than 140 letters...

Thanks for the Tips, Engaing is one of the biggest thing for me . that's how I met you ;P

Great advice. However I plea guilty to retweeting. Viral info is my soft-spot I guess. in fact Heather's RT brought me over here.

I must say one thing I am finding more of is tweets that go over the limit and are filled with hashtags.

Like most I don't have time to work out how to cut the characters to RT especially. I find there are unfortunately more tweets I do not RT because of this which is a shame as i would like to share them.

Very nice. I still haven't jumped into the twitterverse but this is a great post to help those of us who are a little wary of the power of The Tweet.

Useful suggestions on how to tweet. Seems it's becoming the new chat line?

Just had to retweet this*wink*! Thanks for sharing this first guest post on such a timely topic.

@Heather Get to it!

@Bella I don't think RTs are bad, but I think what she's saying is you have to balance the info with the persona tweets.

@Susan I'm guilty of that sometimes, but each hash tag could potentially bring you a new follower or subscriber. I suppose everyone has their preferences.

Great suggestion to keep your tweets grammatically correct. This applies to Facebook too!

I think it applies to life in general.

First, I must get better at retweeting from my Blackberry! @anonymous apologizes!

Second, "And, for the love of Goethe, don’t tweet in text-speak." Laughed out loud, and then heartily applauded. I actually thought someone I was following was a teenager by the way he never capitalized or punctuated his tweets! Turns out he's a successful forty-something entrepreneur, but I'm scratching my head as to how. Must have captured the youth audience!

This is so informative..I am new to blogging and even new to the Twitter...don't know what really works or not...:)

Glad we could help, Hajra.