Illustration: What Dreams May Come

I'm going to take a little break from the logo design series from last week while Heather and I finalize her logo. That post will go up this Friday. So stay tuned. In the meantime... 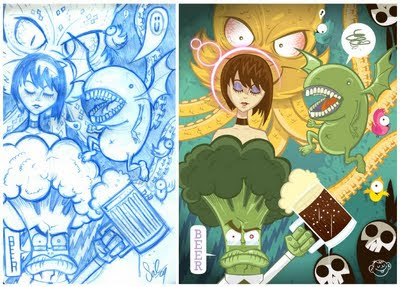 This illustration you see here is 2 years in the making. Funny how that happens, but I'm sure that it wouldn't look the way it looks now if I had completed started it then. It's titled, "Yuki's Dream". It invloves Yuki and her ability to tap into this world (by world I mean my so called mind) that isn't her own. There she meets some strange characters like Jimmy the Vampiric Lima Bean, Maynard the beer-swilling angry broccoli tree and Octo-puss. Witnessing the whole thing are a few Cyclopees (one-eyed birds) and a gang of Izzys (bunny ghosts). As you can see from the sketch, a few things changed and some things were added. One thing that changed was the story behind it. Originally, Yuki was part of this world, but I thought it would be best to make her a gate keeper of sorts, which says a lot of weird things about Yuki.

This was a really fun illustration to work on and one I'm pretty proud. In fact, I think I may be offering this illo as a limited edition print very soon. Enjoy!

Created entirely in Adobe Illustrator CS4 using nothing but the pen tool. The background is all vector as well created using some old paint splatters and ink drops turned into vectors. For a higher resolution version click here.