How a Cat and Raccoon Made it to Spain 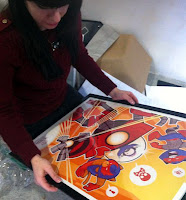 A few months ago I was approached by my friend, and fellow illustrator Javier Jiménez, who I met on the art website deviantART last year. He was currently working on helping the design school and gallery, Estación Diseño, prepare for their March 5th art show called Save&Destroy, in Granada, Spain. The theme of the show was based around Kaiju and Tokusatsu, which are Japanese terms for robots and monsters (think about those crazy Japanese robots you might have seen before, and Godzilla). Japanese manga and anime are very popular in Spain, so it was a natural to go in that direction. Javier liked my work and wanted me to submit an original illustrated poster to the event along with a core group of amazing artists. As you can imagine, I was very excited.


I decided to dust off my original characters Sushi and Gazpacho (a luchador tag team). And for this illustration I created a brand new character named Dr. Cyclope. Sushi is a stoic cat from Japan who meets Gazpacho, a feisty and passionate raccoon from Spain. They have similar passions (for wrestling) and the same thirst for victory in battle, in and out of the ring. Now, Dr. Cyclope is a cyclopee gone bad. He's no longer a regular one-eyed bird after a lab accident that makes him super intelligent and hell-bent on world domination. In the illustrated poster he meets Sushi and Gazpacho and a battle ensues. Naturally. :)

As you can see, I had a lot of fun with this illustration and I was honored to be a part of the show, which went extremely well. So well, in fact, that more themed shows are being planned for the future and I've been asked to participate again.

So far the year has been great and I hope to do more shows abroad and domestically. I'm very thankful for social media and how it can make things like this possible. Let me know what you think of the poster!


***Special Announcement***
The winner of last week's Arena Creative 1 Month FREE Subscription Giveaway, is Susan Oakes. Congratulations, Susan! Todd Arena himself will be contacting you this week and giving you the details on how to redeem your prize. Thanks for participating and enjoy!