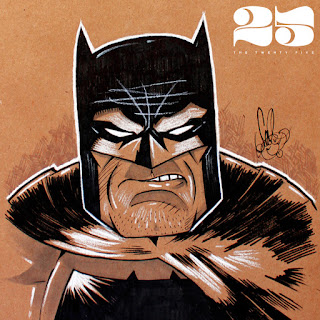 After watching the animated adaptation of Frank Miller's The Dark Knight Returns, I had to draw this version of Batman. I think it's because he's old and extremely nuts that I love him so much. And yes, Batman is a little crazy but he's just as dangerous and brilliant. (For those keeping count, this is 10 of 25)

There's so many imaginary versions of Batman throughout the character's history. There's vampire Batman, Victorian era Batman, Superman raised by the Waynes Batman, etc etc. DC used to call those stories Elseworlds and although Dark Knight Returns came before the Elseworlds imprint, it had been considered an imaginary tale or possible future for the 50+ year old Batman back from retirement. I wanted to depict Batman a little bit animalistic and beat up -- not the 'Bat god' he's become in recent years where he can do no wrong. Anyway, if you haven't already, go out and read The Dark Knight Returns and then see the movie. In the meantime, you can bring the Dark Knight home.

Add this Original Piece to Your Collection
Posted by Unknown at 9:24 AM