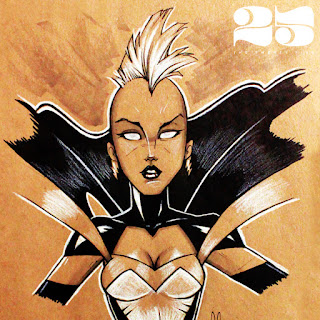 Most people my age grew up watching the X-men animated series of the 90's. It was a pretty big show and it adapted a lot of the comic book stories. Storm was always a standout because she could control the weather. How awesome is that? As I got more and more into comics, I grew to really like Storm. But the version of her I really dug was her punk phase with the mohawk. She just looked awesome. She's always been this larger than life strong woman, but the mohawk gave her this edge.

She's been through quite a bit in recent years. She got married to the Black Panther and became a queen, but then the war between the X-men and the Avengers split them up pretty bad. With all that drama it made sense to her to ask Wolverine to chop off her hair and bring the mohawk back. So to me it's a statement, and I get it loud and clear. She doesn't wear the punk outfit anymore, but she does have a nifty new costume. And now she leads her own team of X-men comprised of only ladies, which is really cool.

She's always been one of my favorite Marvel characters, because she has a lot of dimension to her. Things don't always work out for her, but she keeps moving forward. This piece is up in the store for you if you're a Storm fan.

Add this Original Piece of Art to Your Collection
Posted by Unknown at 7:58 AM