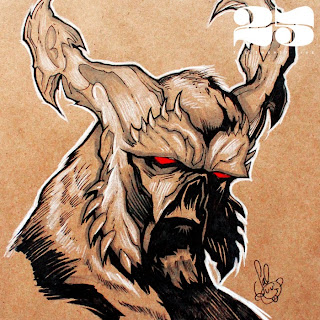 I'm going to try really hard to keep this post short because I've really love Swamp Thing. I'm not going to go into his history cause it's a bit long, but I will say that when Alan Moore took over the book he gave the character a richness he didn't have before. He took the story of a man who turned into a plant, to a plant that thought he was a man, which is devastating to the character. But it's that big difference that makes the character who he is today. Scott Snyder's run on the character made me love him even more because they made him go to war and use his powers to make himself more fierce looking and battle-ready. The horns the wood lining along his jaw and brow, just awesome.

I wanted to capture that aspect of him, but also the sadness associated with the character.  And as good as Alec Holland/Swamp Thing is, his life is so full of tragedy. Being the avatar of the Green and it's champion, is not a walk in the park. Some would say it's not easy being green. Heyo! *rimshot*

Seriously though, I love this character and you should go out and pick up Alan Moore's run on the book. It's over 30 years old and still holds up. Snyder's (and artist Yanick Paquette) run was fantastic as well and reignited my love for Swamp Thing. Even though they wrapped up their run on the book, the job that Charles Soule and Kano are doing now is continuing with fine work. I can't recommend these stories enough. I love this green monster with a heart of gold and you can find my rendition of him up in my store. If no one buys it, I'll be happy because this is by far my favorite piece from The 25, bar none.

Add This Original Piece of Art to Your Collection
Posted by Unknown at 8:56 AM