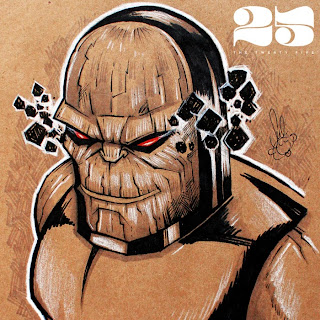 When it comes to villains, there are few who are as awesome as the lord of Apokolips; Darkseid. Not only is he Superman's most dangerous foe, but a foe to the entire DC universe. I've loved this guy for a long time and became an even bigger fan when he was introduced into the Superman animated series back in the late 90's. His appearances continued into the Justice League and Justice League Unlimited series as well. Meanwhile in the comics he was even better at being evil and was still searching for the anti-life equation which he finally gets his hands on in Final Crisis. He enslaves the human race and most of the hero population. Evil wins. And that's just the beginning of the story.

Anyway, the reason I added him to The 25 is because I've never drawn him before and wanted the challenge. Darkseid's and evil god and I wanted to show him smiling at his handiwork and charging up his omega beams. I really wanted to get the rock texture of his face right and splash some inks here and there to make his face pop. I'm pretty happy with the results.

If you're a fan of the series Young Justice, you probably felt the way I did when the big villain revealed of the second season is Darkseid himself. What a sigh of regret when you realize that there wasn't going to be a third season. He's definitely the kind of villain worth waiting for and you can pick up the master of evil in my store. Only 4 more to go. Thanks for reading!

Add This Piece of Original Art to Your Collection