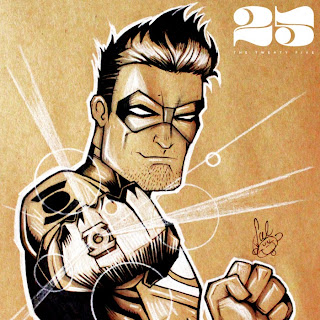 Back when Hal Jordan went nuts and destroyed the green Lantern, a new lone GL was chosen. His name was Kyle Rayner (aka The Torchbearer) and he was every bit the artist he was portrayed to be. He had self-doubt and wondered if he was worthy of being a Green Lantern... the only Green Lantern. He served with the Justice League, alongside Batman, Superman, Wonder Woman -- the big guns of the DC universe. And he made his mark.

I fell in love with the Kyle Rayner. I loved his attitude, his humanity, and of course, the fact that his constructs (the things he shaped from his ring) we're things an artist would create. Big robots, mech suits even boxing kangaroos. He was incredibly relatable. In time, he got the taste of ultimate power and gave it up to reignite OA (GL HQ) and bring back the Guardians. Soon, the Green Lantern Corp was once more a peace keeping force in the universe. And after a long period of time away, Hal Jordan returned as a hero. Kyle Rayner had a big hand in his safe return and Hal Jordan became the front-and-center Green lantern. Kyle continued to ring-sling, but the focus was on Hal again.

Still, he's my favorite GL. Not because of the obvious reasons, but because before he came onto the scene, GLs were chosen because they were fearless. Kyle changed everything because he was able to overcome great fear. And since then, all GLs must have that quality. It's one thing to be fearless, but a whole other thing to know great fear and rise above it and overcome it. That's why he's awesome and that's why he had to be a part of The 25. If someone's picks up Kyle from the store, I'll be a little sad to see him go. I felt like this was one of The 25 I wouldn't mind keeping because of what it means to me.

Add This Original Piece of Art to Your Collection
Posted by Unknown at 8:34 AM