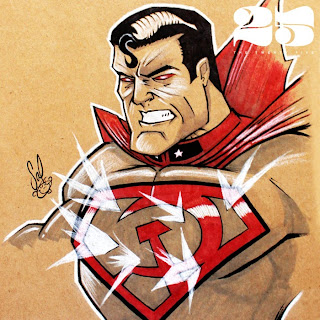 For those who never read the story Superman: Red Son, here's a quick tease. Imagine a world where Superman's ship didn't land in Smallville, Kansas, but instead landed in Soviet Russia? It was written by Mark Millar and obviously had a skewed take on the Superman mythos. Kal El was still raised a farmer, but growing up in a communist country he was quickly noticed by the Soviets and brought in to serve his country's best interests. What's great about this story is that Superman still learns that his powers are meant for humanity as a whole, but when Stalin mysteriously dies he struggles with the decision of becoming the new leader. When he sees that his people desperately need him, the hero gives way to the leader and his power slowly gives way to control. The U.S. is intimidated by all this and they seek Lex Luthor's help to kill this super man. What follows is some of the bestt storytelling I've ever read.

Other DC heroes are given the Red Son treatment and serve as protagonists and antagonists, but it's the cold war between Luthor and Superman that really make this an awesome read. I definitely had to add this Superman to The 25 and he's in the store ready to go home with you.

Add This Original Piece of Art to Your Collection
Posted by Unknown at 8:39 AM