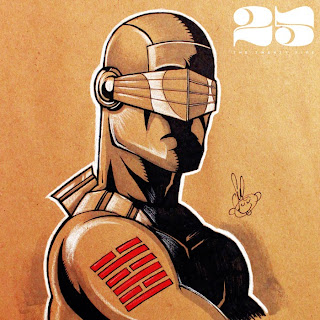 When  I was a kid there were three major shows that all kids were watching; He-Man, Ninja turtles and G.I. Joe. I remember kids coming to school with their backpacks full of figures. We'd bust them out at recess and play until we we're called back in. Occasionally, I brought some of my He-man figures to change things up, but I was met with "they don't belong in the same world!" and my answer was always "But what if they did?. But that's a topic for another day.

Regardless, my favorite G.I. Joe was Snake Eyes. He was the guy decked out in black and a visor and mask that covered his entire face. And he didn't speak! Ironically, the Joe's fought Cobra, and one of their own is named Snake Eyes. Kind of weird, but he was always cool. He spoke with his fists and swords. When the awful movies came out all I was interested in was seeing Snake Eyes and for the most part they kept him true to his animated origins. This original piece is up in the store for anyone who loves the guy.

Add This Original Piece of Art to Your Collection
Posted by Unknown at 11:31 AM