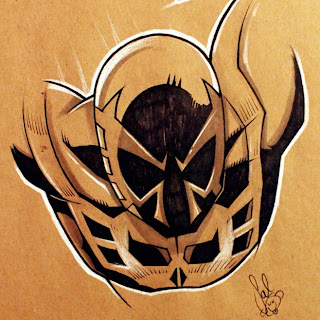 Back in 1992, Marvel came out with a slew of books that took place in an alternate future called 2099. In this future, Miguel O'hara was the new genetically altered Spider-man and he went to war against the evil corporation Alchemax. Peter David wove a tale so good, I still remember it fondly till this day. Go out and pick up some of the collections of these stories and see how Peter David and Rick Leonardi can take a goofy concept like making future versions of Marvel heroes and make it awesome.

I chose Spidey 2099 as the final of The 25 because he's set to come back in September to the current continuity and I'm really excited about it. To see the current Spider-man (Doc Ock in Peter Parker's body) go up against a hot-tempered Spidey of the future is nothing short of amazing. The last time they met was under happier circumstances, but this time Miguel will be dealing with Doc Ock and I don't think it's going to go well. Anyway, Spidey 2099 has a bad ass suit. It's fast, sharp, dark and edgy, but still has the "spider" feel to it. I'll be doing more drawings of this guy soon, but for now here's my take and it's up in my store if you'd like to take Spidey home with you.

Thanks for joining me on this experiment that took a couple of months to complete. It was really fun to draw these 25 awesome characters and present them so publicly on the web. Most of these original drawings have found homes and some haven't (yet), but I truly appreciate the support from everyone who took the time to read and those of you who purchased these originals and have them in your homes now. Truly I do. Subscribe to the blog and keep an eye open for some fun stuff from me, including interviews with some of the most talented indie artists out there. And please, comment below and tell me what you thought about this project. Did you like it? Do you want to see it again? Would you like to participate in another 25 made up of multiple artists? Sound off, kids!

Dennis (tanoshiboy)
Posted by Unknown at 8:18 AM