The Making of Daredevil: Radar Love 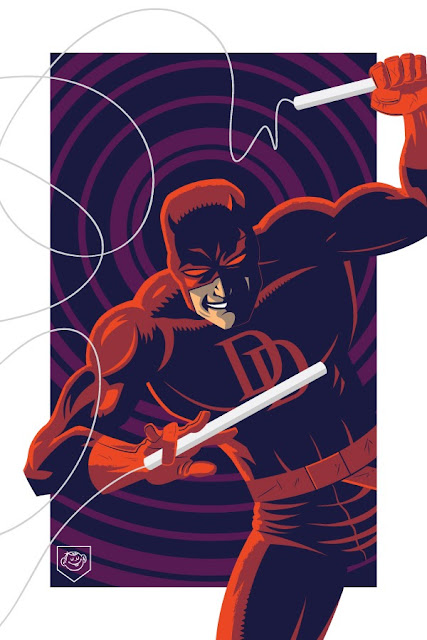 I was really excited when the The Roost approached me to be in their SUPER poster art show at The Curve Gallery. I was more than excited especially since they're in Australia and I'm here in California. It's very humbling when people in other parts of the world find your work and appreciate it, so even with my crazy schedule there was no way I was going to pass.

The idea behind the show was for each artist to take on a superhero of their choice in a poster design. No two posters would have the same hero and it had to be colorful. I knew that Batman, Superman and Spider-man would be up for grabs, so I didn't bother to lock down any of the super popular heroes for myself. I went in another direction and picked Daredevil. I love Daredevil. I love him so much I call him "Matty" instead of "Matt". I think he's an underestimated character and is sometimes looked on as the poor man's Spider-man, but he's an amazing character and I knew I needed to give the devil his due (zing). I started with some simple post-it note doodles...

All of these had something I liked. I almost went with something dramatic like the sketch in the top right hand corner -- Matt (brooding) on the edge of a building with Daredevil's head in the background. But as the sketches kept coming, I realized I didn't want to go with something grim and gritty. That Daredevil is out there and there's plenty of illustrations to support that version of him. As a long time reader of his book, I decided to reflect the current art direction on the book, which is less gritty and more colorful and accessible. So I dropped the idea of rendering this with some photoshop brushes and going clean and colorful. That made sense to me.

The last thumbnail sketch I did (top left hand corner) was the layout I chose. It had a feeling of Daredevil coming at you with a devilish grin and breaking the fourth wall. Here is the sketch...

This is where I started to think about the color palette. DD is all red so I wanted to pick some contrasting tones to really make his costume as bright and colorful as possible without making him look too silly. I was originally going to do a yellow background with white radar lines, which Ben, at the Roost, really liked. But it just didn't work (Sorry, Ben!) and I made the call to go with a negative space effect and turn the blacks into purple. In the end, it was the right way to go and I'm really happy with the end result. I like that the concept of Daredevil coming out of the shadows and breaking through into the light worked.

I want to thank the guys at The Roost for the opportunity to collaborate with them and for putting up with my last minute changes (wink). I'd definitely love to work with them again and if you're in Newcastle, Australia tomorrow (or today) stop by and see all the amazing work at the opening. Here's their facebook invite. And check out their snazzy promo video below.

P.S. Go out and read Mark Waid's current run on Daredevil. It's a truly amazing and fun book.