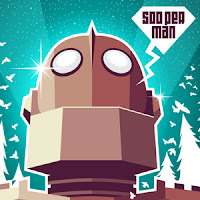 When I was preparing to start work on my Iron Giant piece, the only criteria I had was the theme of the show the Bottleneck Gallery had selected -- "Where is my mind?" Movies, TV shows or music that messed with your head. I immediately thought of the Iron Giant. It's not like Inception or the end of Se7en, but it did have a long lasting effect on me and I knew there was something there I could use to convey an emotional message.

So I looked at it from the point of view of the Iron Giant and went to the ending of the movie when (Spoliers) he blasts off into space to stop the missile and sacrifices himself to save the town of Rockwell, and most importantly, his friend Hogarth. As you can see by these sketches I had a wide range of ideas. 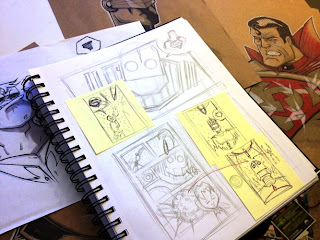 At one point, I wanted to tell the ending in a sequential layout (comic strip). I felt pretty strongly about that idea and then I doodled some ideas on some post it notes and the very last one in the right hand corner felt right. It brought up an experience I had a couple of years ago when I went tubing with my friends up in the Kern River here in California. Things went severely out of control when I lost my tube and was plunged into class 4 rapids. I went through rocks and some huge falls, but the thing that almost did me in was the whirlpool I got caught in. I tried like hell to avoid it, but the current was just too strong. I screamed for help, but my friends could do nothing. They watched in horror as my body bobbed up and down in the white water. I could barely hear them screaming over the deafening sound of the water. It's in that moment that the fear of dying became reality.

I was going to die.

Most people would say that this is the part where their life flashes before their eyes; that regret sets in and all kinds of memories race through their mind before the end. I have to say, none of that happened to me. In that moment, I was sad. I was sad to never grow old with my wife. I was sad to never have experienced fatherhood and I was sad that I would never see my sister again and I was sad at the pain I would put my mother through. 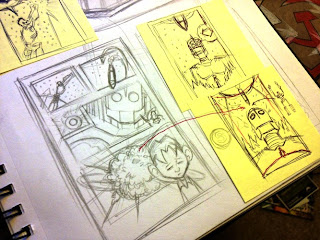 And then a calmness came over me. I accepted my fate and the struggling stopped.

All I thought of was my family and all I saw was their faces. This memory came to me when I was doing that last post-it note sketch. I remembered the feeling like it had just happened and it was a bit overwhelming. But I knew I wanted to visualize that sort of feeling into this piece, because when the moment came for me, I took the people I loved with me and thought of nothing else. I imagined that in that moment, the Iron Giant did the same right before the end.

I'm very proud of this piece, but more so because it's made a connection with people. I've been getting messages and comments from people telling me how much this movie means to them and how much this movie still effects them till this day when they see it. It's a testament to great storytelling by Brad Bird and his team and I'm happy to have connected to people through something I created (click below for a full view). It feels good.


You Are Who You Choose To Be - Available Here

And by the way, you're probably wondering how I made it out of the whirlpool. Well, like the stubborn bastard I am I started fighting to get loose again and that's when I got sucked under the water and shot out the other side and into calmer waters. I was able to get out of the river with the help of my friends and had the best meal of my life afterwards. It was a surreal one, but I'm thankful I can share the story with you.
Posted by Unknown at 10:28 PM